I fully intended to keep up to date with my blog this month however, between trips, I’ve been hastily publicising my new classes which will be starting at Rodley Nature Reserve in Leeds at the beginning of September. Thanks to everyone who has signed up – I’m really looking forward starting some new beginners classes and being able to use the reserve is the icing on the cake.

So where has Start Birding been this month? Well, as some of you will know, I publicised 4 local-ish evening trips over August to Pugney’s, RSPB Fairburn Ings, Swillington Ings and Calder Wetlands to focus on subjects that people can find a little difficult to master namely eclipsed ducks, gulls and waders. Due to the amount of rain we’ve been having, finding good wader habitat has been difficult so mainly we’ve been concentrating on the other two families of birds distinguishing eclipsed ducks and looking at various plumages of roosting gulls. A bonus was our first starling mini-murmuration of the season at Calder Wetlands on Tuesday evening. I wonder what all those young birds made of their first attempt. They performed beautifully and it really made us look forward to what was yet to come.

By far the best evening was our trip to Fairburn Ings where we managed to find an unexpected spotted flycatcher down the Cut end of the reserve. The new viewing screen provided my class with excellent views of common sandpiper, little egret and kingfisher as well as great crested grebes, shoveler, gadwall, tufted duck, pochard, mute swan and sand martins. A female tawny owl nicely finished off the evening as far as the birds were concerned then we walked back with the bat detectors picking up pipistrelle and noctule bat before heading home.

In between these evening excursions were trips to Rutland Water; the Bird Fair (also at Rutland Water) and RSPB Old Moor Wetlands.

Rutland and the Bird Fair were as fabulous as ever but water levels were the highest I’ve ever seen there. Luckily, this concentrated the wader habitat to one area which made viewing waders very easy. A little stint showed up while were at the Bird Fair and waders such as ringed plover, lapwing, green sandpiper, common sandpiper and greenshank were showing well. Of course, the ospreys were the stars and we were able to watch both the adults and the young moving around the reserve. A couple of birds could be seen flying over the Bird Fair marquees.

Each day a crowd of people mysteriously gathered around a patch of willowherb which lined a ditch close to one of the marquees. Once curiosity got the better of us we discovered that they had been alerted to the presence of an elephant hawk moth caterpillar. It was amazing that something that large would otherwise have gone unnoticed. To get a feel of what it is like to visit the Bird Fair then you can watch some film snippets on Bird Fair TV 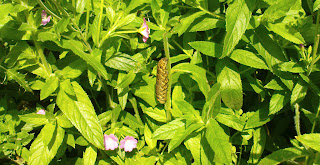 Old Moor Wetlands on Saturday 25th finished off the weekend trips for my 2011/12 calendar. This was a wet but exciting day with hot sun, heavy rain and thunderstorms. We were able to take a good look at ducks in eclipse, adding a garganey to our list, and plenty of waders. These included finding green sandpiper, common sandpiper and wood sandpiper in the same telescope view with greenshank feeding close by. Lapwing, golden plover and ringed plover were also around in good numbers. A couple of young bullfinches provided a challenge for novice birdwatchers as they grazed around the feeders and dock seedlings. A common darter (i think!) settled on a spade handle which I suspect had been placed there to provide photographers with the opportunity to take a more superior photo than mine below.

My new programme of events starts at the beginning of September with my beginners classes at Rodley Nature Reserve and a ringing trip on Saturday 8th. Contact me if you are interested in joining us or hearing more about all the trips between September and December. Alternatively, follow this link for more information www.startbirding.co.uk