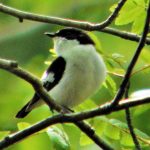 Over the next few weeks, birdwatchers across the UK will witness an epic avian exchange. Thousands of winter visitors will leave our shores and will be replaced by spring migrants; some from as far away as South Africa.

Spring migration is a very special time of year. Unlike autumn migration when juvenile and moulting adult birds are on the move, spring migration presents us with birds in peak condition ready for the coming breeding season. Every bird looks like its picture in your field guide.

You’ll still be able to see our winter visitors for a while. Birds such as whooper swan, pink-footed geese, wigeon, knot and redwing will travel north as soon as conditions are right and may delay their departure until late April. Their breeding grounds in Iceland, Greenland, northern Russia and Scandinavia can remain frozen into early May so it’s best for them to make a staged journey northwards, performing courtship rituals as they go.

In contrast, our visitors from southern climes are winging their way to us and will be arriving from early March. They are in a hurry and need to secure a territory, find a mate and raise a couple of broods before mid-July. This urgency brings with it a cacophony of sound. The first sign that our migrants are arriving is the simple stuttering song of the chiffchaff then, following on from that, the complex songs of other visiting warbler species; the twittering sounds of swallows and martins; the unmistakable song of the cuckoo and, in May, the screaming calls of swifts.

There are so many wonderful places in Yorkshire to enjoy spring migrant birds but only a few weeks of activity, so my hardest job is planning my calendar of events to make sure I include all the highlights.

One such highlight is another type of movement , vertical migration, when resident wader species, such as curlew, golden plover and lapwing, move to Yorkshire’s moorland habitats to raise their young. These are quickly followed by predators such as short-eared owl and merlin. Another spectacle not to be missed is a visit to our county’s wonderful coastal cliffs where thousands of seabirds are already gathering.

The most wonderful thing of all for me is that most of the birds I want to show people can be found here in Leeds. With over 4,000 hectares of green space and some amazing nature reserves, Leeds is one of the best places in the country to become a birdwatcher.  If you’d like to know more then do get in touch.