May is usually a very busy month for Start Birding and this year is no exception. Not only are the spring weekend and evening birdwatching classes in full swing, but also the Breeding Bird Surveys (BBS) for the British Trust for Ornithology (BTO) are now underway. Despite the wet and cold start to the month we’ve managed to see some fantastic birds including cuckoo, swift, common whitethroat, lesser whitethroat, wheatear, corn bunting and yellow wagtail.

What a fantastic show of bluebells we’ve had this month. I’ve spent a considerable amount of time in woodland over the last couple of weeks visiting Parlington Woods, Gledhow Woods and Middleton Woods in both Ilkley and Leeds. As you’ll see from my (usually bad) photos below, most of the woodland walks are wet and slippery due to the recent rain showers but don’t let this put you off – the scent of the bluebells is amazing at the moment and the dappled sunlight really brings out the best of the wood. 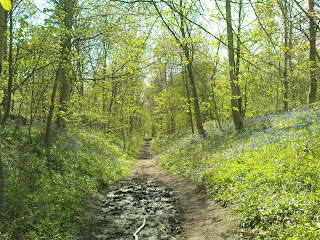 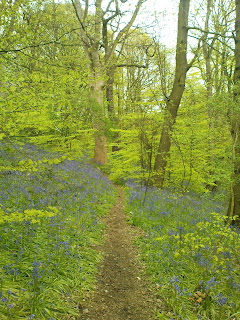 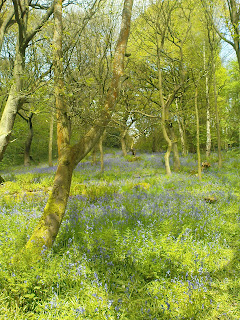 Blue skies and sunshine featured on Saturday when I led a 3 hour walk to Middleton Woods in Ilkley. It was such a relief to have some decent weather after the rain and wind of the day before. The height of the river Wharfe prevented us from finding grey wagtail, kingfisher, dipper and common sandpiper from the bridge so we headed off into the woodland. We could hear that it was full of bird song as birds announced their breeding territories. Resident birds such as blue tit, coal tit, great tit, goldcrest, nuthatch, treecreeper, great-spotted woodpecker, robin, wren and chaffinch were joined by spring migrants – chiffchaff, blackcap, willow warbler and, the star of the show, a pied flycatcher. Curlew could be heard from the adjoining fields and swallows and martins were visible beyond the canopy. I really enjoyed the walk and the fantastic company. 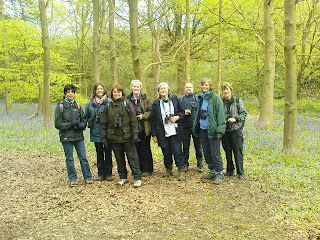 This morning I led a birdwatching walk for the Friends of Middleton Woods in Leeds. It was a sunny start to the day, however the wind strengthened through the course of the morning. By the time we began the walk, the woodland birds were a little out of their comfort zone – especially after having tolerated such a wet and cold start to the month – and we had to rely a lot on songs and calls to alert us to their presence. We managed to get wren, great tit, blue tit, coal tit, sparrowhawk, great-spotted woodpecker, nuthatch and blackcap. Unfortunately the bullfinch I found earlier in the morning didn’t reappear but that’s birding for you! Thanks to everyone who came and I hope that it was useful having someone there to identify the birds through their song. I’ll be doing another walk for the Friends of Middleton Woods in September.