For me, October has been a month of cloudscapes, colour and snipe. I don’t think I’ve ever had so many snipe on my Start Birding trips before.

Autumn was in full swing. Golden and russet leaves were already on the ground; fieldfare and redwing grazed on the berry laden hedgerows and fungi emerged out of the carpet of leaves. We came across a clump of common cavalier, a lovely sable brown fungus with a wide, thin cap and short stipe.

A single whooper swan was the first of the winter for most of the party but the main topic of conversation was a family of mute swans that had been joined by a black swan male. The female had taken a shine to the male black swan and was following him everywhere. The male mute swan and two cygnets seemed have been rejected for the time being but the remained close by. A male goldeneye fed enthusiastically on one of the lagoons and goldfinch flocks fed on thistles and teasels.

On Sunday morning, my Wednesday birdwatchers joined me at Rodley Nature Reserve to practise their birdwatching skills. The lagoons were relatively quiet due to work being done on the reserve to install a fish pass on the river, but we managed to pick up a lot of bird activity on other parts of the reserve. In the two hours that were were there we managed to see, flying overhead, red kite, common snipe, around 40 wigeon, 30 gadwall, kestrel, sparrowhawk and great-spotted woodpecker. Stock dove, redwing and fieldfare sat in nearby hawthorn trees and black-headed and common gull provided some good study material for the beginners class. We finished off the morning by having pie and peas for lunch in the excellent visitor’s centre.

This week has been half term so my Monday and Wednesday class have had a much needed break to digest what they have learned so far. However, my Tuesday group met learn more about migration and winter bird songs. Classes start again next week and will cover migration and weather and adaptations of bird anatomy and physiology. If you’re interested then please call me to book a place on 07778 768719 or email linda.startbirding@gmail.com

November is now upon us and the outgoing migration has almost come to an end. We can now focus on the birds coming into the country from Greenland, Iceland, Scandinavia, Northern Russia and Svalbard. Waxwings have already arrived in the country so watch your berry trees and pray for a visit.

An early influx of bramblings indicates that there isn’t enough beech mast on the continent to sustain the number of birds feeding there. This would normally be an exciting prospect for us, however we may also not have enough food in the UK this year. These finches will readily go to garden feeders so please make sure that you put out plenty of suitable food and maintain the food supply all winter.

I’m currently reviewing a new bird feeder by Nature’s Feast which as 3 compartments, allowing you to offer 3 different kinds of seed. 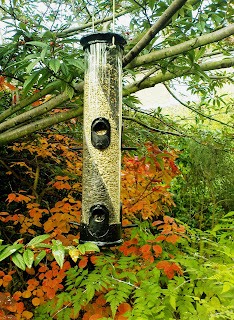 My birds had a choice of black sunflower seeds, sunflower hearts and a high energy seed mixture. I decided to check the seed levels each day to see which was the most popular. The black sunflower was eaten first and more greenfinch visited the garden. Weight for weight, with the husks being on the black sunflowers, there was less edible food in that compartment so I suppose that is why this was emptied first but it has been fun watching the birds take to this new feeder. They usually take a while to use a new feeder, however, this one was in use within the first hour.

It did occur to me that this feeder would be a good option for small gardens with limited capacity for hanging feeders as you can attract more birds into your garden using less space. I’ve now refilled the compartments and will continue to use it and try different foods. I’ll blog about it again when it comes to cleaning time – this is always the test of a good feeder when you’re trying to dismantle a feeder with cold fingers!

all for now – Linda