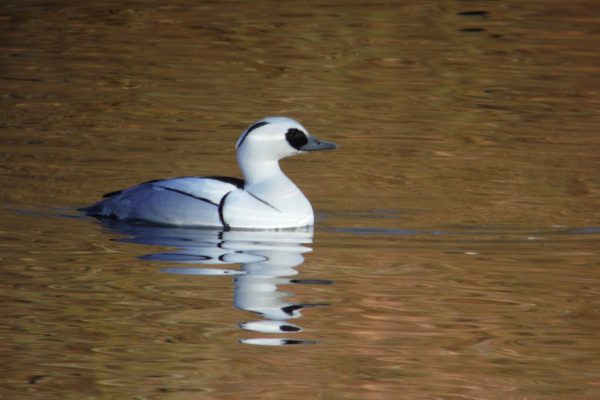 Happy New Year! Traditionally, New Year’s Day is when birders go outdoors to get a good start to their year list. I’ve always like to have a lie in after celebrations the night before so I tend to start off my list with birds from my garden and have a good day’s birding with friends on 2nd January.

It’s been a very warm winter so far and many of the visiting wildfowl from northern Europe, Russia and Siberia have remained on the west of the continent. Hopefully we’ll get a cold snap to send them over to the UK where it is comparatively warmer and I look forward to seeing a drake smew (pictured) in Leeds very soon. We do have all the usual species here but the numbers are much lower than we would normally expect at this time of year.

I’m just putting together my top 5 birding moments of 2018. It’s usually a difficult choice as there are so many wonderful experiences over the year. More often than not, my top 5 isn’t about rare birds but memorable behaviour or an unusual circumstance featuring a common species. I get a lot of pleasure by observing common species in my garden and at local green spaces in Leeds. Stay tuned for my final choice.

During 2019 I’ll be aiming to teach people about common and scarcer species in and around Leeds, not just identification but the whole of a bird’s story. If you’d like to learn about which birds are in the UK during each month, where they’re coming from or going to, how they migrate, whether they stay, what they eat and which habitats they prefer then join me over the coming months. I’ll also be teaching bird songs and calls during each of my classes.