After the Environment Agency announced that half of the UK is now under drought conditions, finding swollen rivers and flooded nature reserves around Leeds and York just goes to show how much rain has fallen over the last couple of weeks. I hope that water levels are now improving at nearby Potteric Carr as things were getting really desperate there.

Since my last post, Start Birding has been planning birdwatching activities around very heavy April showers. Thank goodness for those hides! Not one participant has had to resort to waterproof over-trousers and we have managed to dodge the worst showers by taking refuge just at the right time.

At Clumber Park in Nottinghamshire on Saturday, a walk around the lake produced another pair of Mandarin ducks to add to the ones we saw at Adel Dam last week. Other notable birds were nuthatch, treecreeper, tree pipit, green woodpecker, great-spotted woodpecker, chiffchaff, willow warbler, jay, marsh tit, sedge warbler, reed bunting, swallow, house martin, redstart (heard singing but not seen), tufted duck and goosander. Sadly, we didn’t manage to see any hawfinches this time. If the grey squirrel population is indeed to blame for the decline of this bird at Clumber, then the future for the hawfinches doesn’t look good on the estate given the number of squirrels we saw on this visit. 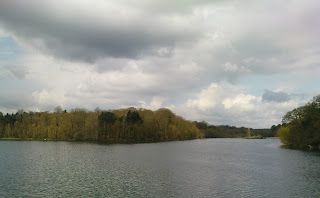 We were lucky in that we only had a slight shower while we were on the far side of the lake which didn’t warrant an additional layer of clothing. Sights and sounds of an equestrian orienteering event on this National Trust estate added to our enjoyment of the day and it was great to see the interaction between visitors, horses and riders.

On Sunday I visited RSPB Fairburn Ings with the recipient of a Start Birding gift voucher. This one was bought as a birthday present. We spent 2 hours at the reserve and, along with common woodland and wildfowl species we managed to see tree sparrow, Mediterranean gull, black-necked grebe, little ringed plover, goldeneye and swallows.

A little later, after saying goodbye to my guest, I had to shelter from a heavy shower while at the Lin Dyke end of the reserve. I was glad of the rather unwelcoming metal hide at that point as it rained so hard even a nearby heron left the area to take shelter. Once the weather system had passed, I continued birding for a while, picking up my first whitethroat and grasshopper warbler of the year. I then headed off towards York and hit torrential rain and surface water on the A1 and the A64. 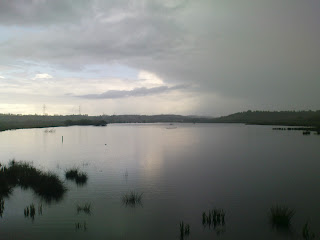 Start Birding has been booked by an American visitor from Los Angeles for a birdwatching walk on Thursday. My guest is staying at York and, due to the changeable weather, I needed to check out some sites around York for suitability (birds, accessibility and water levels). The rain had stopped by the time I reached Yorkshire Wildlife Trust’s Askham Bog nature reserve. However, only the boardwalk was accessible due to flooding and there were a lot of dog walkers. so, after finding a willow tit, I nipped to Hes East for a quick look at this new section of York university campus. The new development has a fantastic man-made lake which has been host to quite a few good birds already, so it is definitely one to watch.

After this I headed off to Weldrake Ings and didn’t expect to see such an expanse of water after the prolonged spell of dry weather we’d had only a few short weeks ago. The River Derwent had burst its banks (not unusual on this section of the river) and the whole area was flooded, including the car park and the walk to the hides. 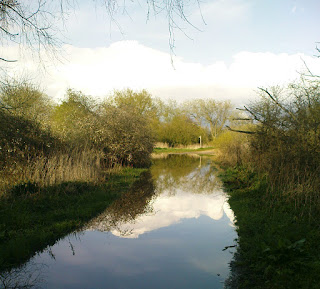 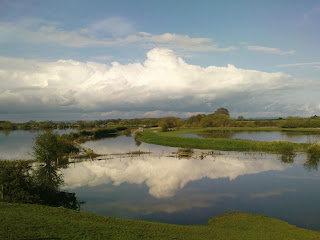 Thankfully (and brilliantly) there is a viewing tower from the Bank Island car park just a few yards north of the turning to the Weldrake Ings parking area. From here I got fantastic views of water, blue sky and dramatic clouds and oh, the birds? …………. I ended the day with a pair of garganey. Bliss! 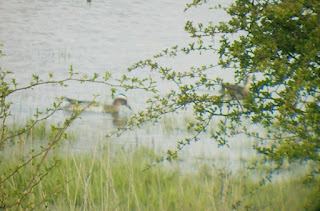 Apologies for the poor photo taken using my phone and my telescope!