What a mixture of weather we’ve had over the last couple of weeks. Snow, hail, gusty winds and rain have really made life difficult for us, never mind our poor birds!

Nevertheless, Start Birding has been out and about as usual looking for birds in and around Leeds. I’ve been lucky to have some wonderful, committed and very hardy people out with me over the last couple of weeks and I’ve really appreciated their company. I’ve also appreciated being followed by a flock of waxwings over the last couple of weeks. A small flock of 29 birds appeared on my street on 25th January, calling loudly from a telegraph pole. They didn’t stay for long and, by the look of them, they were really struggling to find food. Another sighting was reported later that day at Rodley Nature Reserve. I’d also received messages that a similar sized flock had been seen earlier in the week at Morrison’s at Kirkstall and outside Co-op at West Park – more later.

So what have I been doing since my last post? Well, classes have been going well at Hollybush where we’ve continued our theme of understanding wildfowl and have since moved on to birds of prey and wading birds. These are difficult subject areas and I’ve really been impressed with the development of everyone’s identification skills. This week we learned about why waders have beaks of different lengths and how to differentiate between some similar species of wading birds.

Unfortunately, the threat of heavy snow prevented our trip to Potteric Carr from going ahead but more settled weather later that day made a trip to Pugney’s Country Park in Wakefield possible for a couple of hours. The following day, I was joined by five brave birdwatchers at Calverley Woods; the venue for one of January’s “Sunday Strolls”. The purpose of these walks is to introduce Leeds birdwatchers to venues closer to home and to raise awareness of the species of birds that either live in or pass through our city.This walk was organised in partnership with Gael Timbers from the local community group, Creative Calverley

The following Saturday, a recent Start Birding prize draw winner, and her partner, joined me on a walk into the woods around Meanwood to look for woodland birds and learn some bird song. We managed to meet up, despite the very deep snow, and safely made our way to Meanwood. It was a sunny morning, and the temperature had risen so much since the snow fall that the melt water dropping from the trees was like heavy rain. The wood was full of bird song and we were able to pick out treecreeper, nuthatch, siskin, robin, dunnock, bullfinch, chaffinch, coal tit, blue tit, great tit and jay. A male sparrowhawk was extremely active throughout the morning giving us some excellent views of its “flap, flap, glide” flying jizz.

The slight incline back to the ring road was too much for the car in such heavy snow so, when the wheels began to spin, my guests had to pop out and provide some assistance. Thanks to them and a kind lady who  joined in to help get us on our way.

While out on the walk, I received a call from a concerned resident of Swinnow who reported that a large bird had been sitting on her neighbour’s roof for the last couple of days. She thought it was a goose so, once we’d finished at Meanwood, I decided to go and have a look. There was still a lot of snow on the small side roads so I parked my car and walked to the address I’d been given. Sure enough, there was a large bird sitting on the roof – a musgovy duck, a domesticated bird native to Mexico, Central and South America. It was inactive, but it looked well. This clever bird had worked out a good survival strategy while food was scarce. It was not able to feed while the water and ground were frozen so had decided to sit close to a chimney. It had worked out that there was enough heat there to minimise fat loss until the snow and ice thawed. If you have seen it, I hope that you’re feeling reassured now that you know it is ok.

Our “Sunday Stroll” on 27th January went ahead despite heavy rain and high wind, although I decided to cut the session short when the winds became gustier later that morning. Most of the snow had gone already by the time we met at Farnley Hall Park. As it was too windy to look for woodland birds, we first took a look at the Farnley reservoir on the Leeds ring road. A variety of mallard related “dodgy ducks” were joined by wild mallard, coot, teal, tufted duck, goosander, greylag geese, Canada geese, mute swans and gulls: black-headed, common and herring. As the ice had only just begun to clear, diving ducks were at a minimum and there was no sign of species such as pochard and goldeneye that normally visit the reservoir in winter.

On the walk back to the car, a flock of waxwings could be heard above the sound of the traffic and the wind. This time, around 22 waxwings were present, sitting high on a nearby tree. They very quickly moved off towards Swinnow. We had a quick stroll around the reserve at Farnley Hall Fish Pond, off Hall Lane then gave up for the day after finding goldfinch, long-tailed tits and a rainbow nestling in the houses beyond the pond. I hope they found their crock of gold.

Yesterday I had a quick look around Hawksworth Wood for our walk this coming Sunday. Lo and behold, as we stopped to look for dipper and grey wagtail on the stream, those trilling calls were heard again above the sound of rushing water, high winds and noisy traffic. Around 23 waxwings were sitting just above our heads. A perfect end to a lovely walk which I hope you’ll join me for on Sunday. 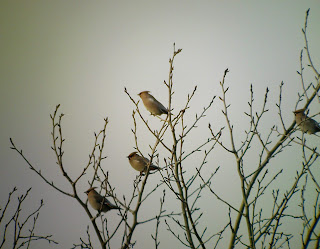 Find out more about indoor and outdoor classes by calling Linda on 07778 768719, email linda.startbirding@gmail .com or visit www.startbirding.co.uk