What a fantastic day we had yesterday at RSPB Saltholme reserve at Teesside. We woke to pouring rain and travelled north

By the time we arrived, the rain had stopped. The air was still damp and the light was somewhat ‘milky’; not very good conditions for photographs but, thankfully, enough visibility for birding.

We started our day with great views of gadwall, teal, redshank and goldfinch then nipped into the excellent visitor centre to see what was around.

Our birding was very quickly focused when we heard that volunteers were setting up scopes on some long-eared owls (LEOs) at the far end of the reserve. We were also invited to watch out for a starling murmuration from the balcony of the visitor centre at the end of the day.

On our way round to the LEO spot we found two hunting kestrels on the aptly named Kestrel Trail. A little egret suddenly appeared from a ditch close to the Paddy’s pool hide. All around us we could see flocks of golden plover and lapwing restlessly rising and falling across the wet grassland – perhaps a sign that a peregrine or a merlin was hunting in the area.

Pochard, tufted duck, mute swan, shoveler, teal and a heron were seen on the Allotment Pool while blackbird, fieldfare, redwing and mistle thrush grazed on the remaining hawthorn berries around the reserve. Occasionally, we heard water rails squealing their courtship songs from deep in the reedbeds.

Those of you who read my blog regularly will know that I try to highlight any interesting landmarks or pieces of art that are close to our destination. Saltholme is surrounded by both natural and man-made landmarks. Teesside is home to Britain’s largest art installation, Temenos, by Anish Kapoor, the creator of the Olympic centrepiece, Orbit and this can be seen from the reserve. I’m sure that is isn’t possible to fully appreciate the structure from Saltholme reserve, however I found it really interesting to observe how the structure appeared to change shape as we walked around the reserve. At one stage, as we watched the golden plover and lapwing flocks, it looked as if the birds were flying through into a long net. To the right of Temenos, the transporter bridge can also be seen to the south of the reserve and Roseberry Topping provides a notable backdrop to the east.

﻿﻿﻿
We knew we were near our LEO spot when we could see a group of people gathered to the right of us along a muddy path. Some very helpful RSPB volunteers guided us, with expert visual descriptions, to the tree where three LEOs sat blinking at us through the crisscross of lichen covered branches. See if you can spot them in the photos.

It’s always wonderful to introduce a birdwatcher to a completely new bird – something that I love to do as much as possible for my guests – but to show people long-eared owls, in fact any owls, always gives me a buzz. They are so enigmatic and regal and I think long-eared owls specifically extend a privilege that allows us to observe them (and be observed) up close. I find looking straight into the eyes of an owl a very humbling experience. This time all the hard work was done for me and I was able to enjoy the experience without having to hunt through the whole copse.

Our next mission was the black-necked grebe (BNG) which had been seen from the Saltholme Pools hide. On our way to the hide, a flock of barnacle geese landed in a field nearby. After trying to explain to my guests where they might have migrated from, we later learned that this flock are feral birds and can be seen at the reserve all year round.

﻿
Mallard, wigeon, teal, pintail, shoveler, tufted duck and gadwall were present in small numbers on the pool. A female goldeneye fed busily in deeper water. Later, the sun finally burned off the last of the milky whiteness of the atmosphere and we were treated to an autumn glow across the grassland.
Golden plover flocks took on an orange glow. We decided to sit for a while and appreciated them before returning to the visitor centre for the starling murmuration.
From around 4pm, we watched small flocks of starlings making their way from the reserve to the pylons close to the visitor centre. Group by group, they gathered and swirled until an estimated twenty thousand starlings could be seen perching on every available horizontal part of the pylons. Gradually, they left their perches and the murmuration began. Starlings bunched, swirled, dipped and glided until, as if one of them had given the signal, they began funneling down into the reedbed below. A few thousand lazy individuals that had remained on the pylons used this as a cue to retire for the night and a second wave funnelled down to join the others – struggling to find a place in the reedbed. What a fantastic sight. One of the volunteers commented that this was the biggest gathering he had seen yet at the reserve.
It was almost dark now, so we decided to look for a short-eared owl (SEO) over another section of Saltholme Pools and have a cup of tea while we were waiting. No sooner had Linda’s cafe made a brew for my guests, a short-eared owl appeared just above the reedbed, perching nicely for us to get a reasonable decent view. Clear skies and an autumn sunset brought an end to our day and we drove home, discussing what we had seen on our day. 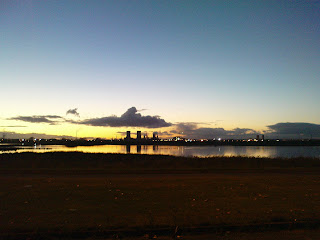 Next week we continue our classes on bird adaptations at Rodley Nature Reserve and at the weekend we will be bird ringing on a farm near York. For more information contact Linda at Start Birding on 07778 768719 or email linda.startbirding@gmail.com
Don’t forget to look for those waxwings!