To say that May has been a bit mad would be a bit of an understatement. June has also kept me on my toes with more weekends away, walks, surveys and reconnaissance trips for my next programme of events. Since my last post, my birdwatching walks have included evenings at Timble Ings and Folly Hall in the Washburn Valley; day trips to Upper Teesdale (yet another Middleton) and weekends to Suffolk, Norfolk and Northumberland.
﻿﻿﻿

I led walks for two community groups; the Natural World walking group joined me on a trip around Harewood and Calverley Woods was the venue for the Creative Calverley group. I was also booked by individual birdwatchers for one-to-one tuition. One trip was booked by a couple from Australia who were touring around the UK as part of their holiday.

June has been jittery due to the poor weather conditions and the effect this has had on the nesting birds. Many nests have failed locally due to eggs not hatching or chicks dying through starvation and hypothermia. We can only guess why the parents have left their nests but, for the parent birds, the decision to find food when the chicks need to say warm to survive has been a daily dilemma for longer than they have been able to endure. Unfortunately the continuing low temperatures are not encouraging many second breeding attempts and not all species will even try. Even identifying small, common birds has proved a challenge to beginners due to wet feathers appearing darker.

My attempts to lure swifts to our new boxes have so far been unsuccessful. Last year a pair landed on our swift brick, after playing our swift CD for some weeks, and we were very hopeful that we would be starting a new colony this year. The closest colony to our house, and we are guessing that this is the source colony, is only a few streets away. They arrived very late this year so this may be the reason why we haven’t seen any activity at the house.  We’re still playing our CD in the hope that we can still generate some interest. I’ll keep you informed.

The highlight for June so far has been my annual 3 day trip to Northumberland and the Scottish Borders with my regular birdwatching group. Due to the Queen’s jubilee weekend, we visited this stunning area a week later than usual and this, coupled with the overcast skies, low temperatures and last week’s easterly winds, may have meant that we saw the start of the outward migration – perhaps brought on a little earlier due to failed breeding attempts. 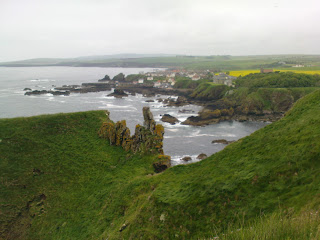 A view of St Abb’s Head from the cliff walk

The weather on Saturday prevented us from sailing to the Farne Islands so we immediately moved to plan B and started our trip with a visit to Druridge Bay taking in Cresswell Ponds, Druridge Bay Country Park and East Chevington Pools. On Sunday we drove north to St Abb’s Head, on the Scottish side of the border. This was as beautiful as ever and we did manage to get some sunshine during our trip there and in the afternoon at Lindisfarne. We managed to stumble across a male black redstart at St Abb’s Head and 2 European white-fronted geese at Low Newton later that day. A spoonbill was also reported at Low Newton the day after our visit. 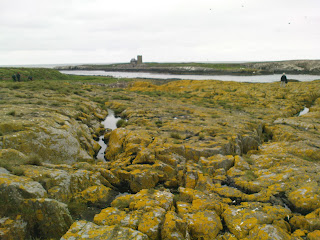 A view of Brownsman Island from Staple Island

The seabirds appeared to be doing well on our visit to the Farne Islands on our final day and good numbers of puffin chicks have been recorded so far. The sun also made an appearance for our final afternoon around Bamburgh and Budle Bay so we finished off our holiday with some lovely views of this spectacular coastline. 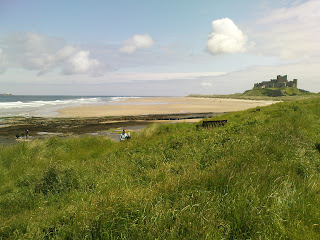 If you’d like to visit this area with a birdwatching guide then please contact me for details.