The sunny skies on Saturday gave us a fantastic start to the month of March when we visited YWT’s Askham Bog followed by the Lower Derwent Valley.

The water levels had receded considerably by Saturday morning but, due to time constraints, we stayed on the boardwalk at Askham Bog. I’d visited the site a few days ago and encountered a very hungry and sociable robin as I entered the reserve. I didn’t have any food with me then so, this time, I took some with me as I believed that it would be friendly enough to eat from my hand. I wasn’t disappointed – it was so humbling to have this lovely little creature drop almost weightlessly onto my palm to take a few crumbs. I felt humbler still when, after trying a second time, I was given a very loud telling off by the robin who was obviously making it quite clear that he wasn’t going to be doing any more party tricks! I put the rest of the food on a fence post which was quickly eaten by blue tits, robins, great tits and a dunnock.

Our target birds for this site were willow tit and lesser spotted woodpecker (LSW). LSWs are often seen on the reserve but, so far, I’ve never seen one there. March is a good month for hearing their calls so I thought we’d give it a try and we hung around the pond for a good while watching and listening. Pretty soon, a wren alarm called in front of us across the water. The bird was very agitated and eventually we found out why; a mink sat up, blinking sleepily. It sat there for a few minutes with the wren fluttering around it then took to the water, out of sight. Finally the wren went back to its business of feeding and replenishing its fat reserves after another cold night.

A great spotted woodpecker appeared on the distant trees with male and female bullfinches. Time was moving on so we headed back. A couple of willow tits appeared “chur-chur-churring” along the path, followed very closely by a goldcrest, singing loudly. Sibilant treecreeper calls could be heard from inside the wood then very soon we were back to the robin site to place some more food on the fence. Our contribution was acknowledged and utilised quickly.

Next stop, Bank Island just outside Weldrake to the south of York. The water is finally receding fast here after severe flooding covered most of the Lower Derwent Valley for the majority of the winter. Wigeon, teal, pochard, tufted duck and mallard could be seen from the tower along with mute swan and greylag geese. We also watched blue tit, great tit, greenfinch, bullfinch, treesparrows and willow tit on the feeders from here. A walk onto Weldrake Ings produced more bullfinch, reed bunting and a goldcrest flycatching amongst the riverside willows. Pintail, redshank and black-tailed godwit were added to the list.

At Thorganby, we were able to add shelduck, golden plover, ruff and dunlin to our list. A couple of buzzards circling above the flood plain created a wave of panic among the wader flocks which helped us to find the golden plover. The dunlin bunched high above the water so I search round for a peregrine but couldn’t see any raptors other than the buzzards. We hunted unsuccessfully for little owl and, as we were about to leave feeling disappointed, a barn owl was seen right behind the hedge adjacent to the car park. We watch this owl for what seemed like hours, quartering and perching with the occasional glance in our direction. I took lots of photos keeping as secluded as I could in a car park next to a village hall! It was two o’clock in the afternoon on a sunny day and the owl was very focused on feeding so I’m guessing Friday night was bad for vole hunting. 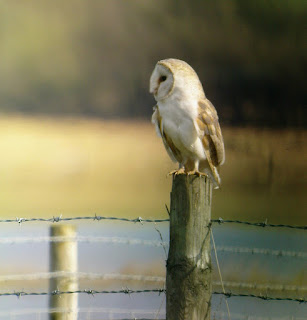 Peeling ourselves away from the, still perched, barn owl, we drove straight towards Bubwith bridge to see if we could find the 2 Bewick swans with the whooper flock. I’d seen them there a couple of days ago. They were easily found with the flock of whoopers but subtly different and subtly apart from the main group as they had been two days ago.

A quick visit to Ellerton, to showcase the whole area, enabled us to find some great barn owl pellets for future classes then we finished our day at North Duffield Carrs. We added singing skylark to our list and bumped into a couple of birdwatchers who’d found a shoveler skull close to the path. I’m grateful to them for handing it over so that I could use it in my classes and glad that we were able to help them find the Bewicks.  Thoroughly satisfied with our day we headed off back taking a look across the water towards Bubwith bridge again for the Bewicks. We found one bobbing its head, as if in greeting or deference, to each whooper swan that passed by.

This month, our birdwatching is going to be focused on areas closer to home so the rest of our birding in March will be in and around Leeds. I’m starting my Tuesday morning beginners classes this week and Wednesday evening classes continue indoors until the beginning of April. Weekend classes will take us through the Aire Valley; to Woodhouse Ridge and Meanwood Urban Farm; Temple Newsam and Troydale in Pudsey. Find out more by calling me on 07778 768719 or email linda.startbirding@gmail.com

A dipper was seen again in Leeds this weekend, waxwings are still around and the spring migrants are about to arrive – so there is lot to get out there for. Why not come and join me