Well, what a changeable start we’ve had to April with snow, chilly winds, hail storms and rain interspersed with warm sunshine. I hope that you’ve all managed to get out and enjoy the arrival of our early spring migrants without getting caught out by the weather.

Over the last couple of weeks Start Birding has been planning new beginner’s classes which will commence in September. The first of these will hopefully run from Rodley Nature Reserve – details to follow shortly. I’m just looking for a suitable venue for the second one and I’ll let everyone know once I make my decision. Please contact me (if you haven’t done so already) if you are interested in joining an indoor class to learn more about birds and how to get the best out of your birdwatching.

Also during the last couple of weeks I’ve visited Newby hall for the first time. The garden was really beautiful and was filled with spring bird song. In between sheltering from the rain and hail showers, I managed to see quite a few species of birds including goosander, nuthatch, treecreeper, great spotted woodpecker, chiffchaff, willow warbler, blackcap, bullfinch, long-tailed tit and coal tit. 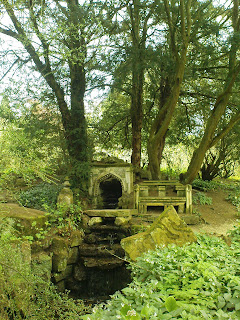 Last weekend I had a couple of trips to the Aire Valley visiting Lowther lake, the new St Aidan’s site, RSPB Fairburn Ings and Swillington Ings. It was lovely to see avocets and little egrets in the area and spring migrants were firmly established in the valley. Chiffchaffs and willow warblers, blackcaps, swallows, sand martins and house martins will hopefully be joined by the next wave of spring migrants in the coming weeks.

Right on cue on the 6th April, a pair of mallards turned up on the garden pond at home. They have arrived the same week every year for the past 5 years. Occasionally, others turn up and we have had as many as 5 individual birds. Not bad for a garden in the middle of Burley in Leeds. Mostly, other males drop in and cause havoc as they try to copulate with the resident female. You can imagine the mess that is created in the pond as the resident male battles to keep his mate and fight off the interloper.

Thankfully, the mallards never stay to lay eggs here and only use the pond during courtship. It would be lovely to have some more ducklings at home but I’m a long way from any large body of water and they would never be able to survive their first few flightless weeks surrounded by roads, cats and urban foxes. 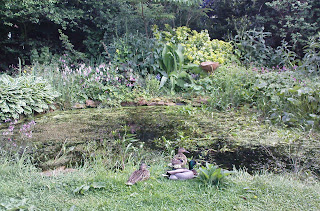 Although it is still early in the season, sightings of swifts in Wakefield encouraged me to start playing our swift CD at the upstairs window to lure birds to the boxes on the gable end of our house. Last year we managed to get a pair perching on the swift brick late in the season which may mean that they were a young pair prospecting for a nest this year. They continued to acknowledge the house for the rest of the season so we’re keeping our fingers crossed that we may be starting a new colony this year. I’ll keep you posted.

Last night I led a trip to Golden Acre Park and Adel Dam Nature Reserve. Again there were plenty of chiffchaff, willow warblers and blackcaps and we managed to see a few treecreepers and a couple of mistle thrushes collecting worms after a slight shower. Teal, tufted duck, great-spotted woodpeckers and little grebe were upstaged by 5 male and 2 female rather splendid mandarin ducks which posed beautifully in front of the hides. Despite the showery evening, we managed to be in the right place at the right time and got back to the car park without getting wet.

If you’d like to join me on one of the trips then please give me a call.