Over the last few days Start Birding has been leading spring walks around the Harewood estate and surrounding farmland. 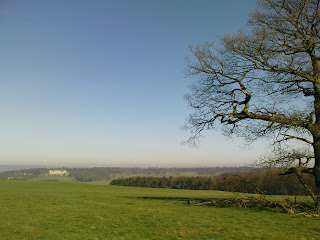 On Tuesday evening, a group of birdwatchers joined me, armed with binoculars and torches, to look for woodcock, tawny owl and bats. The sun was already quite low as we made our way towards our usual woodcock viewing point. The sky was beautifully clear and the temperature was dropping fast. There wasn’t a red kite to be seen on route (which is unusual these days) but we did picked up the high pitched song of goldcrests at the top of the canopy and the air was full of singing wrens, robins, song thrushes and blackbirds.

We reached our usual viewing place and began to look and listen for the woodcock. The woodcock is a native, woodland wader with a long bill, looking very similar to a snipe. It nests on the ground and is well camouflaged as its plumage is very much like dead leaves. From February to July, it performs a unique display flight at dusk, roughly repeating a chosen route until dark. The best way to see this bird is by finding some suitable habitat and waiting for one to fly by. The woodcock’s song is a series frog-like croaks followed by a high-pitched twis-sick! When there is a lot of background noise, such as traffic noise or wind blowing through the trees, it is this second part of the song that is more audible.

At that wonderful crepuscular time, when the blackbirds nervously alerted us to the presence of emerging tawny owls, we heard the first tell-tale squeak of a roding woodcock followed by a fly past which clearly showed the woodcock’s long beak. At our usual viewing point, our woodcocks normally complete their cycle at about 3 minute intervals. Our woodcock this evening seemed to be roding over a larger territory as it was taking much longer. Nevertheless, we managed to get a few good views and a chance to listen to the roding calls. At one point two birds flew past together.

Check out this link to see what they look and sound like.

By this time, male and female tawny owls were calling close by and pipistrelle bats were feeding on insects above our heads along the tree line. As we made our way back, the explosive calls of pheasants drowned out any chance of hearing more woodcock. As the sky was so clear, we were treated to a fantastic view of the waning moon with Venus and Jupiter close by and Mars appearing later to the east. We looked at the moon with the telescope before heading back, checking the stream with the bat detector for Daubenton’s bats.

On Sunday, I led my early spring walk around Harewood and the surrounding farmland towards East Keswick and Wike. It was another beautiful day, however the temperature was much reduced in comparison to the last 2 weeks of fantastic spring weather. Despite the lower temperature, the sun provided enough encouragement to the birds which were singing loudly in the first section of our walk, a patch of woodland on the Harewood estate. Here species included red kite, blue tit, coal tit, great tit, wrens, robins, stock dove, nuthatch, treecreeper and chiffchaff. We also watched hare, grey squirrel and a shrew running around the understorey. While walking through New Laithe Farm, we were alerted to raptors being present by rooks, crows and jackdaws massing together and flying erratically. A red kite and two buzzards were being mobbed and a kestrel was soaring close by.

Tree sparrow, shelduck, coot, moorhen, mallard, Canada and greylag goose were added to our list at Hollin Hall and the final section of our walk provided species such as yellowhammer, reed bunting, meadow pipit, tree sparrow, skylark, lapwing and linnet. All the while we were treated to incredibly close up views of red kite. Our total number of bird species was 40 over the 4 hour walk with the possible addition of a great spotted woodpecker heard in Spring Wood.