January 21, 2012 by Linda Jenkinson General
No, not an account of the latest fashions, Start Birding is just back from a 3 day trip to Dumfries and Galloway in Scotland. The weather was cold and clear most of the time – perfect for our stay and for watching flocks of swans, geese and waders.
During our trip, we travelled the length of the Solway coast, staying at Rockcliffe which is close to the RSPB reserve at Mersehead. We started out birdwatching at Powfoot, a beautiful village close to Annan where the sunshine optimised the intricate colouring of all the wildfowl gathered on the Solway. We started our list here with flocks of pintail, scaup, wigeon and red-breasted merganser. 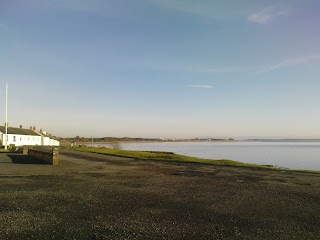 After that we visited Caerlaverock Wildfowl and Wetlands Trust reserve. This is one of the best spots to see large numbers of barnacle geese in winter. The entire population of barnacle geese from Svalbard over-winter in the Solway making it an important conservation area. Many whooper swans also over-winter here as do pink-footed geese and many species of duck. Often the fields are full of waders such as lapwing and golden plover and raptors and owls hunt the fields. As it had been quite mild leading up to our trip, there weren’t many waders in the fields on our visit but we did get a large flock of curlew. Scanning the fields we found roe deer, fox and hare. We finished the day watching barnacle geese flying off into the sunset. 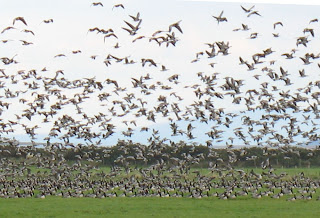 On the second day we visited an inland loch in the middle of Castle Douglas called Carlingwark Loch. Here we found goosander, goldeneye, shoveler and large flocks of wigeon and teal. Our journey then took us west to Stranraer to birdwatch at Loch Ryan. This is a notable place for large numbers of scaup (and very close views as a pose to distant views in the Solway). This is also a good place for wintering grebes, long-tailed duck, eider and shag and we weren’t disappointed. Turnstone, ringed plover, knot, lapwing, oystercatcher and redshank lined the loch and there was also a good show of gulls, wigeon, pintail, tufted duck and mute swan.

On the way back we stopped at Wigtown which is the book town of Dumfries and Galloway (the Scottish answer to Hay on Wye). The town has its own hide and nesting osprey in the spring and the townsfolk ring the town hall bell when the ospreys arrive each year. In the winter the hide is a good place to view the salt flats and brackish pools. Here we had good views of kingfisher and little grebe and more wonderful wildfowl. A buzzard was feeding on the carcass of a dead mute swan. More barnacle geese fed on the salt marsh and a grey seal emerged in front of us in one of the channels.
On the last day we went to (what I think is) the best reserve in the UK – RSPB Mersehead. It has everything – big sky, open fields, crags, heath, rough grassland, hedges, reedbed, saltmarsh, scrub, woodland and estuary with a great beach to walk on. It was a fabulously crisp and sunny day which really brought out the colours on the yellowhammers in the hedgerow. They were joined by tree sparrow and reed bunting and we had good views of song thrush. In the woodland we found treecreeper, goldcrest, blue and great tit. Close to the water on the edge of the wood, squealing contact calls alerted us to the presence of a water rail which we found foraging under a patch of rotting wood. 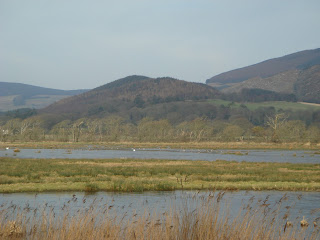 As the water was frozen, most of the wildfowl were concentrated in one area – here we added gadwall to our list. Wader numbers were also low here and no extra species were picked up either on the inland pools or on the Solway. I was really keen to find a jack snipe that had been seen the previous day but the pools were still frozen and time was moving on – we were heading for the Loch Ken area.

At the feeding station near Laurieston, around 50-60 red kites were perching or swooping around the hide and fields beyond. Raven and buzzard were also present. We watched these for a while then headed off to find Greenland white-fronted geese. This particular flock is often difficult to find among the undulating landscape and they can be quite flighty, therefore some local knowledge is needed to be successful. Luckily, the flock was feeding in one of their favourite distant fields so it was possible to scope them without any disturbance.

After this it was time to head off home and we were treated to another fantastic sunset to end the holiday. We had some freezing fog on the journey back to Yorkshire, which made driving interesting, but we got home safely to Leeds. Thanks to my companions for their excellent company on the trip.