I’m just back from Start Birding’s annual winter trip to Dumfries and Galloway in south-west Scotland. This year I was joined by 8 lovely people and, once again, we stayed at the wonderful Millbrae House in Rockcliffe owned by Linda and David Birdsall. 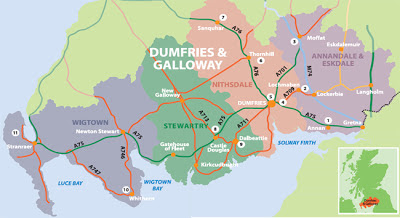 We began our weekend by having second breakfast at the lovely Cross Lanes Cafe on the A66 then made our to Powfoot which is close to Annan; a beautiful place to start your list.

Our birds here included sheduck, pintail, displaying red-breasted mergansers, teal, oystercatcher, lapwing and bar-tailed godwits. A small starling flock gave us an unexpected murmurration for a few moments as if they were celebrating a short break in the weather.

From here we spent the rest of the day at the Wildfowl and Wetlands Trust’s reserve at Caerlaverock. The sound of whooper swans greeted us as we opened up the minibus to make a quick cup of tea. A large flock of barnacle geese called loudly as they took to the air. Finches and tits fed noisily around the birch and alder trees around the car park.

Once settled in the first hide, we were able to quickly train our binoculars onto an individual green-winged teal from America which was chasing after its European relatives on the lagoon. Its vertical lemon stripe was clearly visible amid the crowd of horizontally striped cousins and the birds were close enough for everyone to learn the difference between them. Whooper swans flew onto the lagoon in small groups as we were watching.

As is often the case at Caerlaverock, yellowhammers lined the hedgerows leading to the next hide. A brambling was seen on the nearby feeders with blue tit, coal tit, great tit and chaffinch. Thousands of barnacle geese could be seen grazing in the fields around the reserve. Two merlins and a buzzard looked for their last minute feeding opportunities as the light started to fail and perched long enough for everyone to get a view in the scope.

We were made very welcome on our arrival at Millbrae House with coffee and homemade cake and, once we had freshened up after a hard day’s birding, we went off to Kippford for our evening meal. Later, a barn owl was seen quartering over the fields around Rockcliffe.

The following morning, before light, tawny owls called loudly outside Millbrae House. While we waited eagerly at breakfast for the red squirrels to come to the feeders, nuthatch and treecreeper were seen with robin, dunnock, tits and finches.

Our destination for Saturday was Loch Ryan at Stranraer, about 75 miles from Rockcliffe. This sea loch is where hundreds of scaup gather in the winter and they can be seen at very close quarters from the road side. This year was no exception and large rafts of these large sea ducks could be seen easily in great detail using only binoculars. A telescope revealed hundreds more floating further out from the shoreline and pretty soon we’d also spotted Slavonian and great- crested grebes, wigeon, displaying red-breasted mergansers, red-throated and black-throated diver, goldeneye, shelduck, and a black guillemot on the water. Turnstone, oystercatcher, ringed plover and pied wagtail grazed on the shoreline while curlew and lapwing fed in the fields behind us. A little egret appeared briefly from a channel in an adjacent field and flocks of greylag, pink-footed and barnacle geese could occasionally be seen on the horizon.

A quick look at Stranraer harbour added shag and cormorant to our list then, unfortunately, the weather took a turn for the worse by the time we’d reached The Wig to look for the surf and velvet scoters that had been reported a couple of days earlier. Poor visibility made viewing impossible so we headed off for our next stop, Wigtown.

The thick cloud and rain made light levels unsuitable for viewing long distances but we were able to see more flocks of barnacle and pink-footed geese on the saltmarsh while pintails, teal and wigeon sheltered among the vegetation on the flooded freshwater pool.

After a long drive back we were ready for quick rest at Millbrae House and our evening meal just outside Rockcliffe. In the evening we got together over our maps of the Solway to show everyone where we’d been so far and our destinations for the following day. One member of our party is a really talented artist and he was able to show us the brilliant work he had done using some software on his i-pad. He had really captured the essence of each of our venues and the birds we had seen.

Waking again to a male tawny owl calling outside my room, I filled the flasks and the biscuit box for our final day of birding. We hung around for a glimpse of the resident red squirrel at Millbrae House but it decided not to show itself; probably too content with its cache of food to venture out on such a bad morning.

After packing the minibus and saying goodbye, we dropped down the hill to look for birds in the cove at Rockcliffe and were surprised to find 3 greenshank sitting with a redshank on one of the seaweed covered rocks. Some other holiday makers joined us as we peered at the birds through the rain spashed telescope lens.

Our next venue was the wonderful RSPB Mersehead reserve not far from Rockcliffe. I think this is my most favourite reserve in the whole of the UK (so far). It has a variety of habitats ranging from estuary to craggy hills with small woodland areas and large expanses of wet, rough grassland, lagoons and reedbed. In addition, the fantastic wall art on each of the hides makes it a pleasure to spend time inside watching birds. 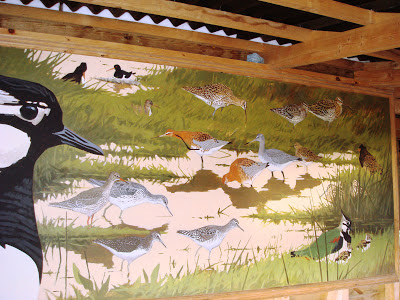 The top sighing here was a bouncy flock of twite which sat in the hedgerow for long enough for everyone to get a clear view. Dunlin and ringed plover were among the waders on the estuary and flocks of barnacle scattered the fields on either side of the main path. Gadwall was added to our every expanding list before we left for Carlingwark Loch in Castle Douglas.

It was raining again by the time we arrived making it hard to find new species here. We did get good views of male and female goosander and goldeneye, tufted duck and teal could be seen sheltering in the margins. Alas, there was no sign of our target bird, a redhead smew so we left to watch kites at Lauriston . As we approached the feeding station, over a hundred kites could be seen either perched on trees or circling around the feeding area. Others hung in the air over nearby fields. A buzzard closed in to feast on the scattered pieces of meat. 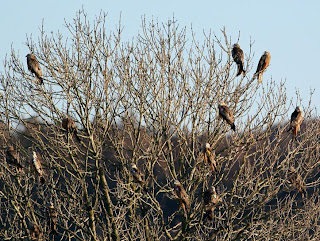 ﻿Our last venue was Ken Dee Marshes to look for Greenland white-fronted goose and red squirrel. After stopping to check a couple of flocks of distant greylag on the way, we finally found the white-fronted geese sitting on a mound close to the road. So as not to disturb them, we had to hide the minibus behind trees so that we could get out and watch them with binoculars. Luckly they stayed put but there was nowhere to park to allow us to get the scope out to take photographs. We ended the day with a lengthy walk to the nearest hide on Ken Dee Marshes. I was so relieved when a red squirrel turned up within seconds of us arriving at the hide as everyone was feeling a little tired after the walk and a lengthy day of birding in the rain. ﻿
Our journey home was uneventful, however, the promise of heavy snow became reality as rain turned to sleet and then to snow as we climbed over the pennines. An hour later and we would have found it difficult to continue. We arrived home safely and all relived our best moments of  D&G tour. 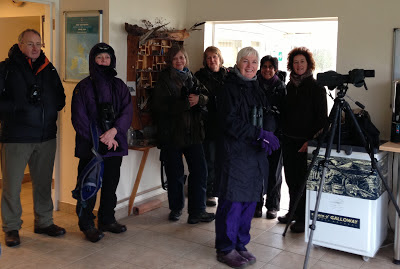